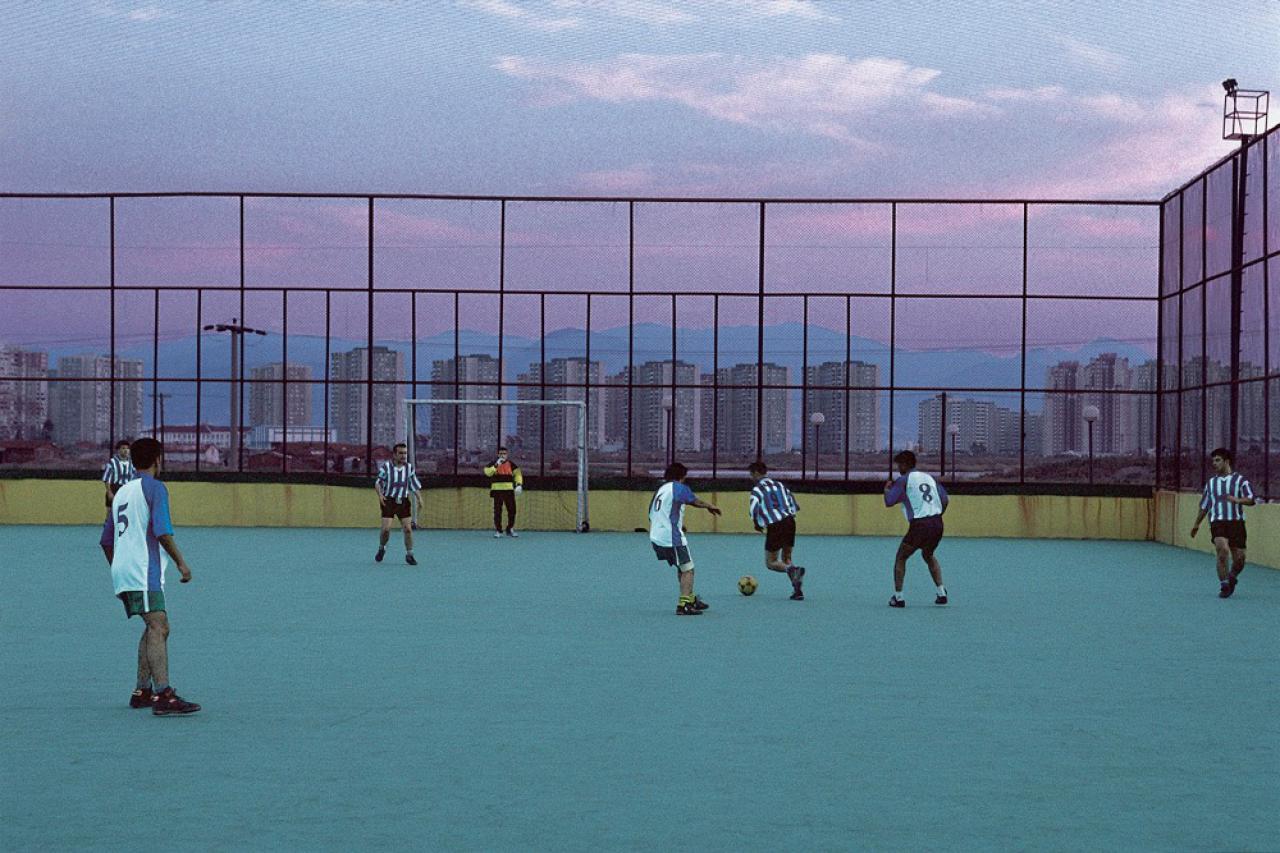 Signed and numbered on verso in black pen

Verkocht
In the city of Izmir in Turkey, boys play football. The blue of the sky resonates with that of the field. The vertical lines of the bars and buildings punctuate the composition. This scene takes place in 1998 but, through the prism of Harry Gruyaert, it becomes almost timeless.
Born in Antwerp in 1941, Gruyaert studied cinema and photography in Brussels from 1959 to 1962 before starting a career as a photographer and an avid traveler. These are not stories or anecdotes that he repatriates from his various journeys in Europe, North Africa or Asia. For more than forty years, it is the changing colors of the world around him that Harry Gruyaert captures. His photographs do not respond to a narrative desire but seem to develop a new language: that of color. It is a way for him to carve what he sees. "Color does not show a subject or the scene I'm photographing," he says, "it's a value in itself. It's even the emotion of photography." It is hardly surprising that he became one of the pioneers of color photography in Europe, deciding in the second half of the 1970s to devote himself entirely to it.
This control of color, perfectly illustrated by this print, is the fruit of a progressive search. In the TV Shots series, which he produced between 1971 and 1972 and which he considers as his first successful work, Gruyaert is already interested in colors and their vibrations.Pop art, which he discovered in 1968 in New York, greatly contributed to his vocation as a colorist. The same goes for American photography, which is a major influence of his work. He says he discovered in 1976, with the MoMA exhibition "William Eggleston's Guide", "superb 'dye transfer' prints which gave a great sensuality to the color" in which he recognized his own approach.The cinema will also have a considerable impact on his way of thinking about the image which, through his camera, becomes a graphic composition where saturated colors and light, expertly mastered, come to respond with poetry.
Traveling is an integral part of Gruyaert's work which is represented by the illustrious agency Magnum Photo since 1981. More than by its inhabitants or its iconic monuments, it is by the palette of colors that it reveals the essence of the place that he visits. Gruyaert knows how to give back to each country that he visits the colored range which is his own, from warm ochres of Morocco to the cold shades of Russia, while passing by these shades of blue typical to Turkey.
These photographs have other subjects than everyday life, whether they are taken at the seaside or in an urban environment. With these moments, captured in a versatile and unexpected way, the artist manages to capture and frame reality in a very personal way. The photographer explains that his approach is not intellectual but purely intuitive. According to him, getting a good photograph, that is to say a unique image, is a question of balance: a cyclist passing by at the right time or a shadow that highlights a piece of architecture… Finally, it's a sort of "miracle", quoth Gruyaert. But not everything is a question of aesthetics in his photographs which, although they do not have a narrative character, are not intended to be purely decorative. They are not silent, they say things about a place at a specific moment.
Man is often present in his photographs but he can be reduced to the state of an anonymous silhouette. Here, Gruyaert does not belong to the tradition of French humanists; he feels much closer to the American tradition. What interests him, more than the human being itself, is the way it fits into its environment, fusing with it in a vibrant scene with colorful contrasts.
Harry Gruyaert