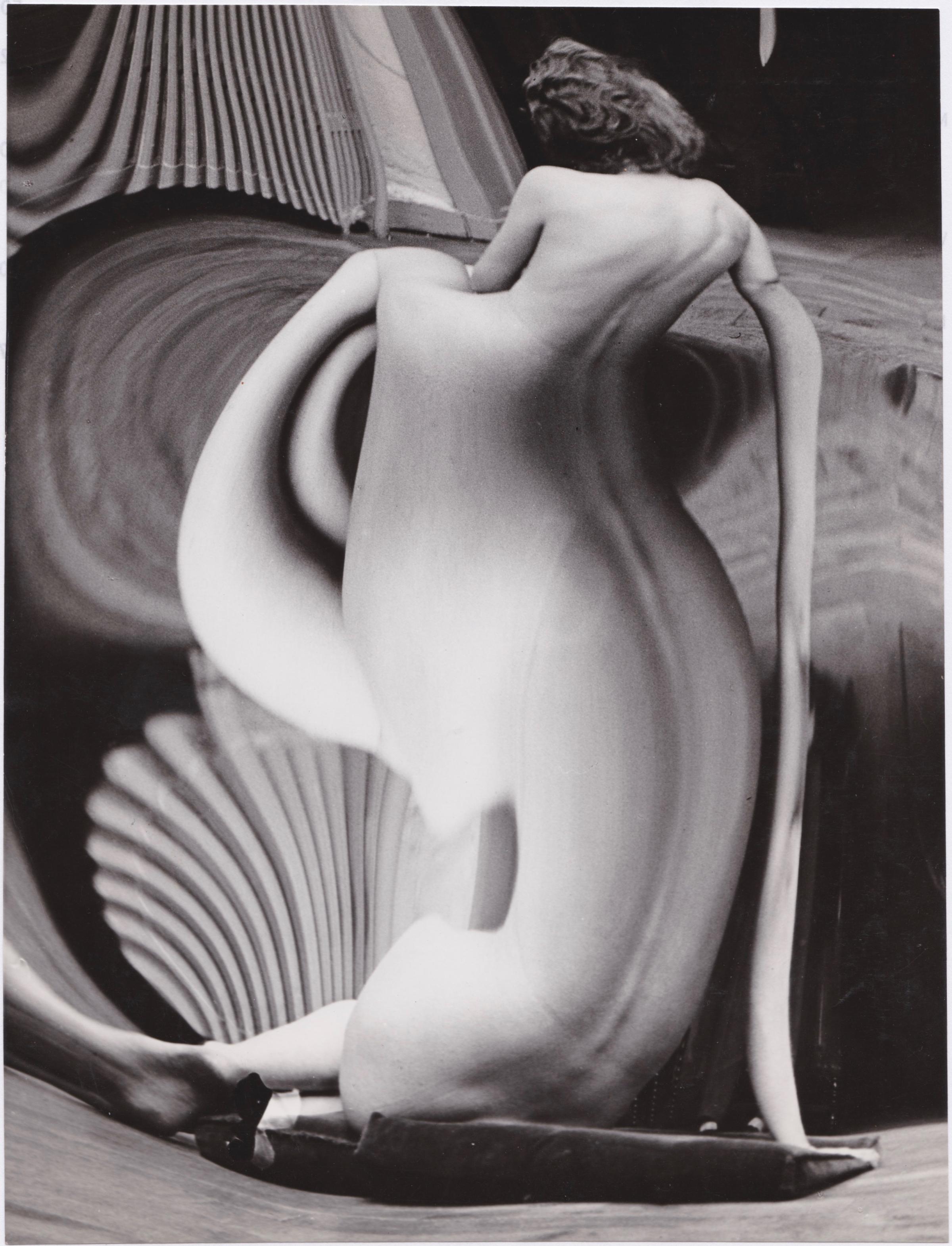 47 688.00$
incl. btw
This early semi-glossy silver print has a light fold near the lower left corner visible under raking light only. The print verso shows some traces of a former mounting.

By helping to distort this nude in 1933, the mirror is here the first assistant of André Kertész. The Hungarian reporter-photographer gets a distorting mirror at the flea market, similar to those he saw at the Jardin d'Acclimatation, and makes about two hundred Distortions in a few weeks. The curves of his models are confronted with those of the mirror and generate an abyss in which our eyes try to find their bearings.

In the artist’s own words: "I purchased two deforming mirrors at the flea market – the type of thing that is found in amusement parks. With the existing light and an old lens invented by Hugo Meyer, I have realised amusing impressions. Some images resemble sculptures, whereas others became grotesque and frightening."

André Kertész moves to Paris at the age of 31 and starts working as a press photographer. The history of art will retain a pillar of surrealism and a great master of photography. Contacted in 1932 by Aimé-Paul Barancy to illustrate the magazine Le Sourire with a series of nudes, Kertész is inspired by a child's play to produce what remains one of the most surrealist works he ever produced. The original title Déformation gives way to the one we know today, Distortion. This series was published for the first time in the US by the magazine Photography (n°46) in 1936. The name, comprehensible both in France and in the United States, will remain.

The mirror of Distorsion # 82 does not think about the information in the center and duplicates the model's body while reversing it. This unexpected, unidentified, sinuous body lets us see a fan-shaped radiator supposed to warm women throughout their session. In the manner of a cubist painting, the twist of the image cuts the subject, duplicates and reshuffles it on a flat surface. Usually an accomplice in figuration and the reproduction of reality, photography is the first to stand up to the unusual. Each surface reflecting another reality becomes a doorway to a strange world that Kertész tries to show us.

All of Kertész's work has been fashioned from nature. From August 1917, he spotted the magic of the world around him with his Nageur sous l’eau. Since that day, the distorted perception of the human body has an important place in the work of the artist. A series made in 1927, of which only one portrait survives, and a portrait of Carlo Rim in 1930 indicates that this vision continues to inhabit the photographer. It is really when Le Sourire is published, on March 2nd, 1933, that we can measure the originality of his gaze and the universe in which he lures us. Aberrations, exaggerations, shortcuts and enlargements highlight or erase body parts while inviting us to reflect. Although humorous, this nude approach is highly aesthetic for the surrealists. The artist goes beyond the object and produces a work literally of another dimension, related to his time and close to the nudes without form  by Pablo Picasso or Salvador Dali’s melted clocks.

Aesthetically, Distortions stands apart from the work of Kertész and makes forget the melancholy character of the photographer. Recognized for his right lines and his significant framing, André Kertész signs a work that upsets his oeuvre but especially that leaves its mark on the photography of the inter-war period. His treatment of the nude is an avant-garde within the avant-garde. Under the influence of photography, painting and sculpture have freed themselves from the figurative representation for a long time. Here, in this mise en abîme, photography frees itself by representing the inexistent.

The initial publication of Distortions did not see the day despite an advanced model, and it was not until the work of Nicolas Ducrot in 1972 that it finally reaches a legitimate international recognition.

More about this art work on smArty

André Kertész was a one of the most influential Hungarian photographers. He is best known for his contributions to photojournalism, with distinctive and dynamic compositions in his photo ...Lees verder