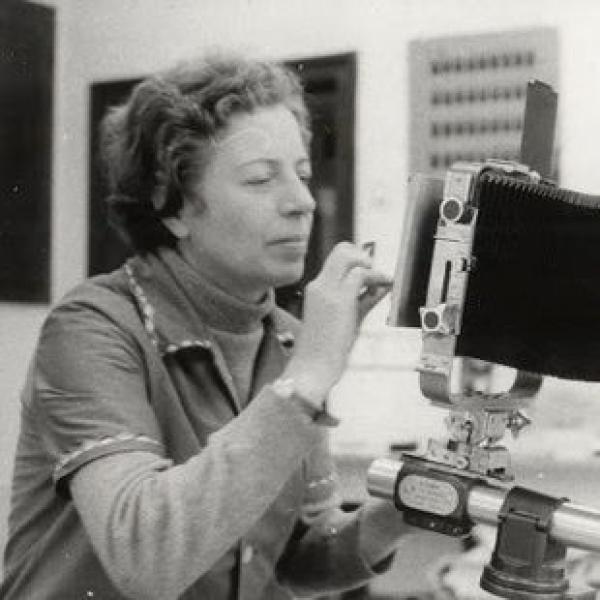 Hungary, 1938 – 2018
Katalin Nádor poured her heart and soul into photography, to such an extent that she said she had forgotten about life. Nevertheless, she did not see herself as an artist and did not follow any genre nor trend throughout her artistic career. She chose to photograph for her own personal pleasure and her work is characterized by a strong individuality, yet always deprived of any biographical context.
Born in Budapest in 1938, Nádor was discreet. She worked as a museum photographer for over 30 years at the Janus Pannonius Museum of Pécs, the town where she passed away in 2018. In the context of this archival work, she took photographs of the multiple works of art of the museum with a great thoroughness. This careful consideration given to details is a characteristic that we can find in her artistic production as well. Her work makes the connection between photography as a means of documentation and photography as an artistic medium in its own right.
Throughout her career, she drew inspiration from various sources. The Janus Pannonius Museum is a cultural institution that is particularly directed towards modernity and there she documented the work of renowned artists such as Ferenc Martyn or Victor Vasarely.
Moreover, she worked with the artists of the Pécs Workshop during the 1970s and, through them, she was in contact with various neo-avant-gardist trends. This collaboration has been particularly crucial in the achievement of her art, as we can see notably with her work on superimposition in some prints of the Graphic effects series.
Working with the artists of the Pécs Workshop led her to the numerous experimentations that enabled her to produce these abstract prints. She also followed the path of Hungarian precursors such as László Moholy-Nagy, Tihamér Gyarmathy and György Kepes.
Katalin Nádor produced a couple of abstract series. They notably gather objects of everyday life which are enlarged to such an extent that the details comes to form geometric shapes. The object looses its physical materiality and figurative aspect. The enlargement of the subject is a conventional way in photography to break away from reality. Katalin Nádor used it in her first series at the end of the 1960s in order to create an abstract aesthetic in which no realistic element remains. Her close-ups of water droplets or soap bubbles create geometric structures and compositions with a graphic aspect. To achieve this result the artist used multiple materials, transformed liquids into static images and rendered their translucent aspect through her work on light.
Katalin Nádor’s prints, by breaking away from the figurative dimension of the object photographed, can exist for themselves. They become a form of art properly speaking and they no longer are just a simple means to apprehend reality. It is in this dimension, both concrete, anchored in reality, but also abstract and conceptual, that lies all the ambiguity of these prints that become the support of the dialectic between reality and image.
In the 1970s in Hungary, creating abstract works of art goes against the realistic art advocated by the State. Therefore, abstract art is given, voluntarily or not, a political dimension. For example the Chapel Exhibition of Balantonboglár, in which Katalin Nádor participated alongside with the Pécs Workshop in 1973, has been considered retrospectively as a political action and has consequently been banished by the State. The relationship to abstraction was different on the east side of the iron curtain. This was also the case for objects of everyday life that were given a new strength far from the nationalist Magyar aesthetic that tended to document the happiness of living in the countryside.
Aside from her abstract series, Katalin Nádor produced a significant number of other prints which explore the different genres and techniques made available by photography. She nevertheless refused the status of photographer until the end of her life and referred to herself as "someone who works with light". In that respect, she reminds us of one of the masters of 20th century art, László Moholy-Nagy.