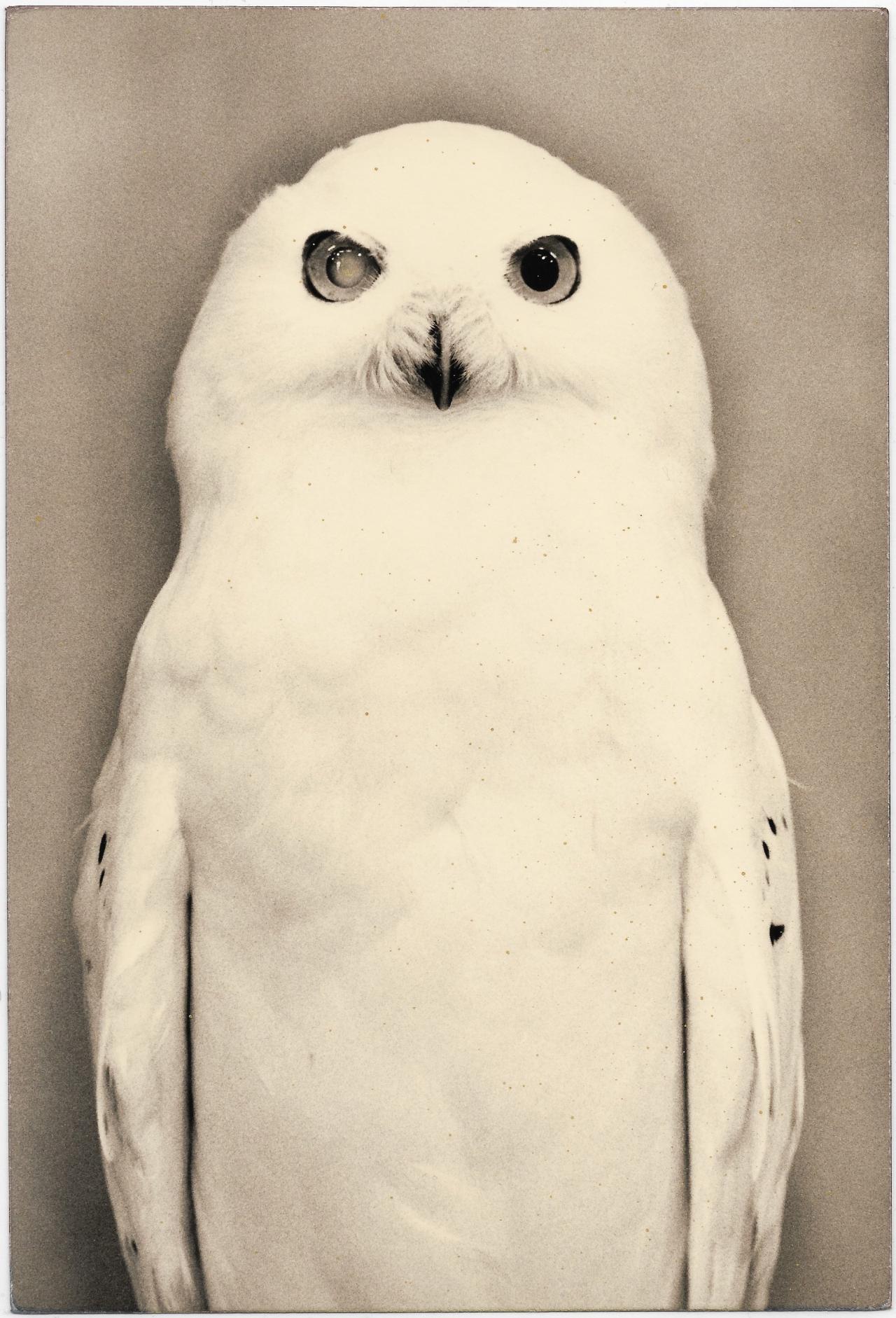 Gelatin silver print + mixed media, printed 2016
Size: 24 x 16 cm
Edition: 4/20
Stamped, signed and numbered on verso
Sold
A white owl, facing us against a neutral background, stares inexorably at the spectator. The bird is frozen in a hieratic position which may remind us of an identity portrait.

Masao Yamamoto is a Japanese photographer but his work is not just the one of a photographer, it could also be seen as the work of a poet. This print belongs to the series Kawa = Flow in which the artist explores the movements of nature. These movements, whether they are fast and vivid such as the wind lifting the grass of a field or slow and quiet like the cloud moving forward in the sky, have one point in common: their impermanence. The prints of this series, by the contemplation they inspire, would therefore be analogues of haikus, traditional Japanese poems celebrating the evanescence of everything.

Each one of these photographs captures a precise instant of this world which is characterized by a constant change. They constitute a form of meditation on the alterability of our existence and the nature that surrounds us. In that respect, Yamamoto’s work unites with the principles of zen Buddhism in which he draws his imagination.

The artist said that he likes keeping a form of mystery in his photographs in order that each spectator can appropriate them and invent from them his own story. This part of mystery dear to Yamamoto undoubtedly lies, at least partially, in the timelessness of the scenes he captures as he dedicates himself essentially to the genres of landscape and still-life.

If their subjects are timeless, Yamamoto’s photographs, which are monochrome most of the time, awaken nevertheless by their aged aspect and their singular texture a certain nostalgy of the past, the memory. The photographer has a habit of reworking his photographs post-printing, notably with tea, giving them a worn appearance but also a form of unicity. Trained to be a painter, the artist carries out diverse experimentations on the surface of his prints, thwarting at this occasion the frontier separating photography from painting.

His work, which enhances the benefits of meditation but also the research of beauty as a tool of spiritual transcendence, is regularly exhibited worldwide. His prints have notably been the object of an exhibition in 2018 at the Craig Krull Gallery located in Los Angeles. Many renowned museal institutions, such as the Victoria & Albert Museum in London, La Maison Européenne de la Photographie in Paris and The International Center of Photography in New York, count among their prestigious collections some of his prints.

Influenced by the principles of Zen Buddhism and Shintoism, Yamamoto  Massao believes that beauty and happiness can only derive from ...Read more