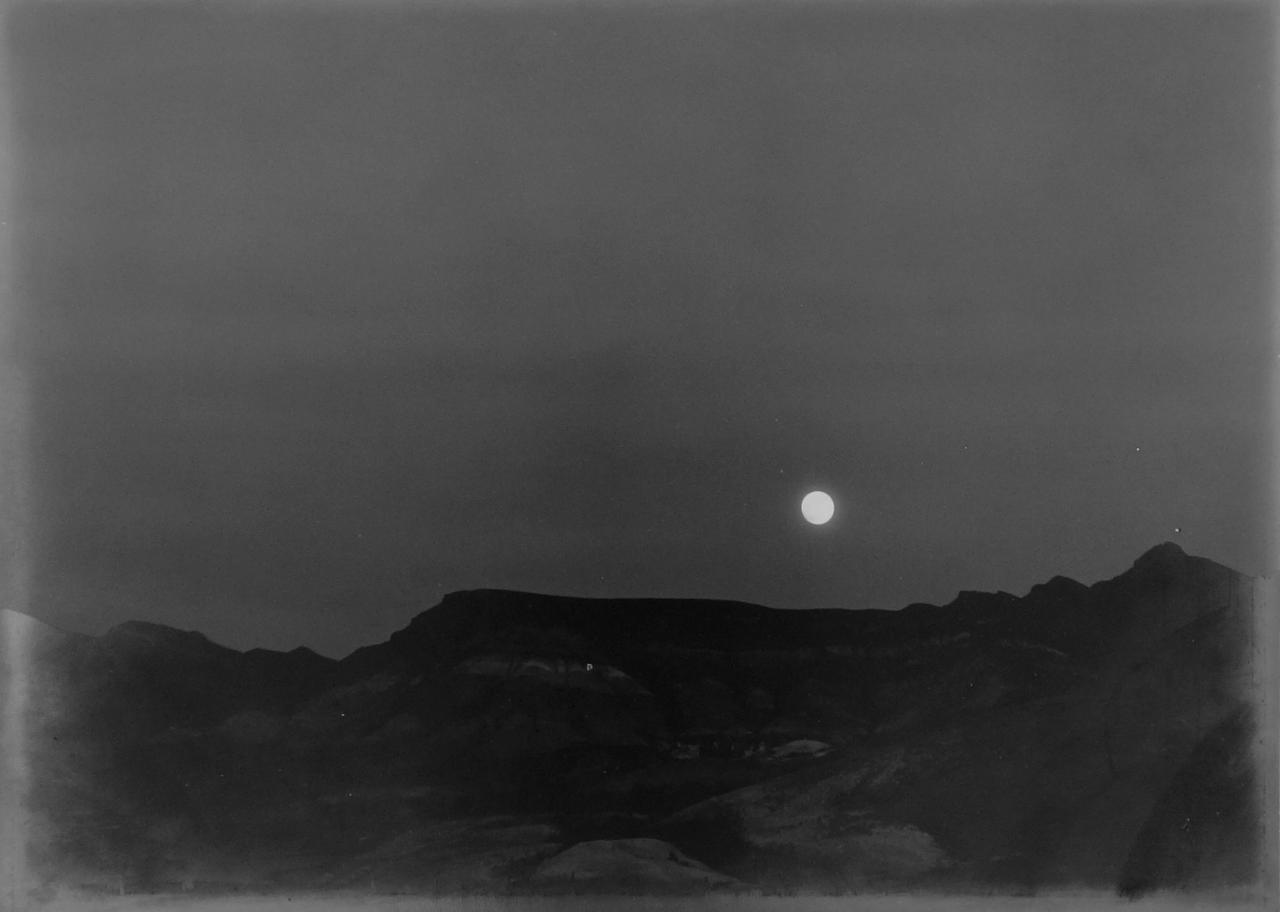 Artworks > Photography
Edward Weston
1938
Vintage gelatin silver print. Fair to good condition.
Image size: 17 x 24 cm
Signed and dated in pencil on the mount, titled in pencil on verso.
Mounted.
27 281.25$
incl. tax
Four small circular losses of emulsion in the lower portion of the print. The edges of the print are lightly sunned and have a few small chips. Silvering is visible at the lower portion of the side edges and along the bottom edge. The photograph is mounted to beige board. The front of the mount is age-darkened to different degrees as a result of past matting treatments, and has minor surface soiling. The reverse is age-darkened and has minor surface soiling.
What trick must one operate to make images speak, photographs resonate and the dim shade of black take a lively halo? Edward Weston’s 1938 Moonrise, taken amongst the Death Valley’s abrupt surfaces is typically the type of print that triggers this question like an echo in a viewer’s mind. Reflected within the darkly dramatic heights of the valley’s mounts, is Weston’s allegiance to a certain idea of the artist, the photographer.
The romanticism present in this photograph, example of Nature’s eternity and power, addresses the photographer’s role as a spokesman between spirituality and art. Indeed, like his slightly younger counterpart Ansel Adams whose own Moonrise photograph shot in the Mexican desert encountered tremendous success in the 1940s, Weston believed in an art of universality and eternity.
In Weston’s case, the duality between his interest for shapes and lighting in their purest, simplest form and his devoutness to an often rebellious and untidy anti-conformism was also what led him to Mexico. Although his stay there in the company of romantically rebellious and revolutionary artists like Diego Rivera took place a decade before his Moonrise was shot, his interest for both complex ideas of art as a means of spirituality and its articulation through powerful yet formally natural composition was intact. His involvement with photographer and muse Tina Modotti was most certainly what encouraged Weston’s ever-growing quest of meaning through photography. The influence of the young woman and their work together only pushed Weston further down the road to his quest of meaning.
The monumentality of landscape under the piercing moonlight, whitest and purest point of the shot, speaks to primal feelings void of cultural association. The dramatic halo of the moon which draws in the viewer in this particular shot, highlights the idea of the photographer as an individual on a personal quest towards immutable elements which pertain both to art and to life. Moonrise might just well be the elevation of Edward Weston towards his ideal vision of photography, one that the more delicate reflections of moonlight embraces in its total purity. The Moon being a softer source of light for a softer life.
Edward Weston